After slowly getting up on Friday, as I had a few to many beers writing my last post, I started to scribble down some notes for my trip to Tokyo. My plan was fairly simply. I just wanted to see if I could make it there and make it back alive, although along the way I wanted to see some sights, book tickets at the Ghibli museum and go to a used English book shop. This sounded easy enough.

I got on the train at Kazo which took me straight to Asukusa, a good area to start as it had some interesting history as well as some cutting edge sights to see. The latter being the Tokyo Skytree that has only been properly open for around 4 months. After just over a hour journey on the train, this is where I got off. I was expecting some awe inspiring building but I did not realize how hard it would be to look at it in one go. The Toyko Skytree is mainly a TV and radio broadcasting tower that reaches 634m, therefore making it the second tallest structure in the world. Despite it being only the second tallest it is still comparably tall, requiring you to crane you neck up if standing directly underneath, which after a while hurts quite a bit. It is a bit strange as it stands out so much. It is set next to a river, although urbanized, where people gather to fish and walking across the street you find shops and restaurants that seem to have been there forever. In my opinion it seems a feat rather than a spectacle. 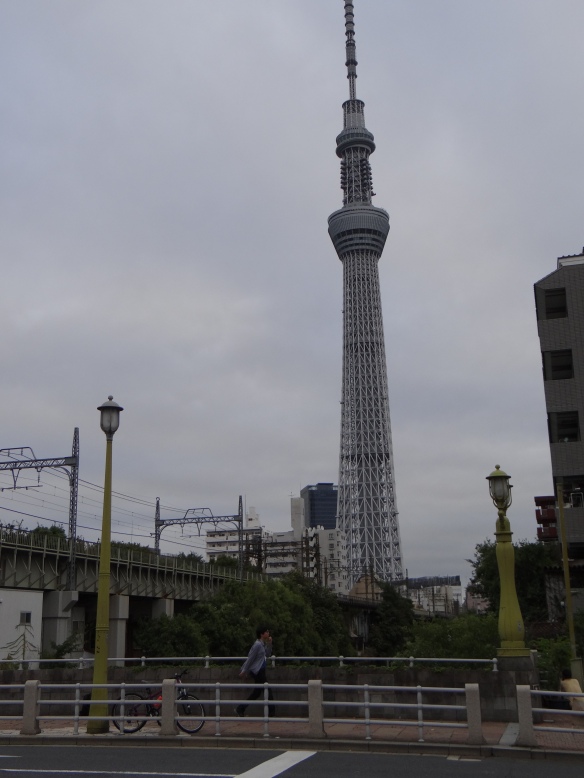 A distant perspective of the Skytree

I went across the road and ducked in a ramen shop to get some lunch. It was quite interesting because you had to place your order at machine at the entrance by inserting money and pushing some buttons. Although, as I was obviously foreign, I had some help. After leaving the Tokyo Skytree I went to explore the rest of the seemingly juxtaposed Asukusa. I managed to stumble across a shrine that put anything I had already seen in Kazo to shame. This was among a tranquil park that had a natural and unkempt feel to it, a lake in the middle with white storks wading in it looking for some fish. Then walking another 2 minutes I was by the Asahi headquarters, with the “Golden Flame” on top, or as I read, the locals like to call it the “Golden Turd”. Once seeing it I could understand why. Crossing the river from this building led me into more central Asukusa. It all became a bit more bustling and there were lots of shops, ranging from the tacky to the stylish. Although I didn`t have the money to shopping so I headed to Senso-ji temple, which was located nearby. This was pretty amazing. At the foot of the temple stairs was a large pit where people were burning incense, wafting the smoke on to their bodies and clothes, as to wash away evil spirits and cleanse their souls. Inside and monk was praying and performing his holy duties, although in the spotlight of abundant tourists. A stream ran by next to it that had koi carp swimming in it. It was generally what I loved and expected of Japan. 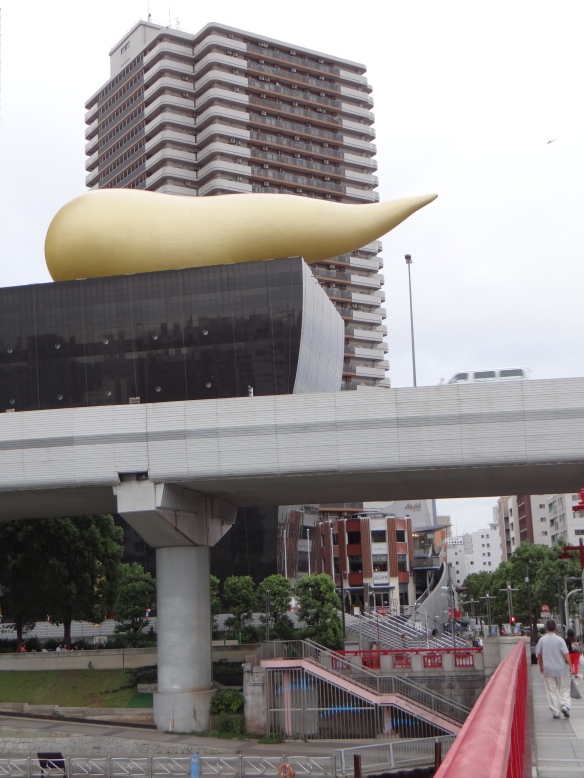 The Asahi Flame aka “Golden Turd”

Parts of the Senso-ji Temple

After I had finished taking pictures and floating around aimlessly enjoying the masterful scenery I decided to try find this book shop that I wanted to go to. It was in Gotanda, a place that was situated on the main central line of Tokyo, the Yamanote line, so I didn`t think it would be that hard to get to. I braved it and, after several attempts of entering stations, I got on the Tokyo subway system, which I thought was going direct to Gotanda. Although I started to think I was on the train far to long and felt like I had past far too many stations that I thought necessary. I got got off desperately and looked at a map and realized I had got well too far into west Tokyo. Somehow I managed to get myself back to central Tokyo, to a station called Shinagawa. This didn`t alleviate any concerns of being lost as it was probably the biggest most confusing train station that I had seen. It was quite dark with screens flashing advertisements everywhere, and there where so many lines to take that it was all so overwhelming. Even the Shinkansen (aka Bullet train) left from this station. Despite this I eventually managed to find the Yamanote line and got on my way to Gotanda.

Once at Gotanda, I was tired and quite pissed of by this stage, I tried to follow the directions I had scribbled down to this book shop. At home writing them down they seemed simple enough but funnily enough they took me wandering around Gotanda confused for another 2 hours. After a while I decided it was time to call it a day and started to head back, when suddenly a Japanese man took interest in me on the street. He said “where are you from?”, “I like your tattoo”. I replied, not caring who he was or if he was intimidating or not, “can you help me find this book shop”. Luckily, this guy for some reason was just walking around Tokyo with no purpose, he decided to give me a tour of Gotanda and took me to a book shop. Despite it being a Japanese book shop they did sell a small selection of English books. I grabbed whatever would interest me most. I thanked him for helping and we went for a quick drink, as it was getting late and I was getting increasingly apprehensive about getting home, exchanged details and agreed to contact him next time I was in Tokyo. He, Ito Daisuke, was a security guard learning English for music. He liked the Beatles and led Zeppelin. I told him I was an English teacher.

I scraped my way home, being confused at every single opportunity and station I needed to change at. Although, I did make it home. Just.